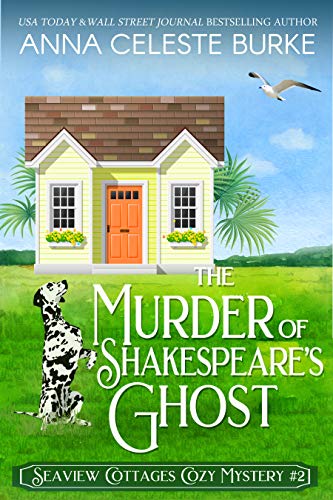 Miriam Webster and the Grand Old Lady Detectives [G.O.L.D.] take on their first case when the tenant in Shakespeare’s Cottage swears the Bard of Avon’s ghost is on the prowl.

Miriam’s not a believer in ghosts, but when she and her companions catch a glimpse of a hazy figure that bears Shakespeare’s unmistakable likeness, she’s no longer sure what to think. When the ghostly apparition suddenly disappears, it leaves them mystified.

Their investigation soon takes an even more bizarre twist when the ghost, to borrow a phrase from Shakespeare’s Hamlet, “shuffles off this mortal coil.” A murdered ghost means the G.O.L.D. team have no choice but to involve homicide detective Henry “Hank” Miller who complicates matters, especially for Miriam.

A dead ghost is just one of many surprises for Miriam Webster and her sleuthing pals. Poking into the past, they soon discover the cottage’s previous occupants had a few skeletons in their closets. Do those old bones hold the key to uncovering the motive for a new murder?

As Shakespeare’s Cottage gives up its secrets, can they figure out who murdered Shakespeare’s ghost before there’s another victim?

Grab your copy of this delightful cozy mystery by USA Today and Wall Street Journal bestselling author, Anna Celeste Burke to find out!