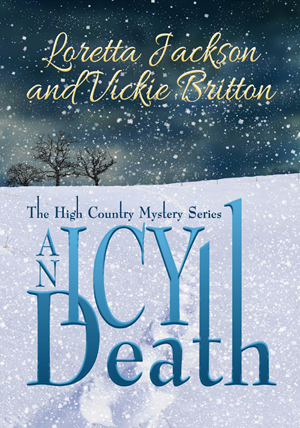 In the heart of a raging blizzard Sheriff Jeff McQuede discovers a woman frozen to death in her car. At first he believes her death to be an unfortunate accident–until he finds clues that point to cold-blooded murder. Margaret’s husband, Arthur, left her in the stalled vehicle to brave the storm and manages to reach Joe Trevino’s isolated ranch. The case becomes more complicated because of the recent warehouse robberies at Trevino’s store. McQueede finds that Trevino is Margaret Burnell’s business partner, and that she has traveled from their Casper store to conduct a company audit. In addition, Margaret has planned to meet with her only child, a run-away daughter she hasn’t seen in years. Trevino, the missing daughter, and Arthur Burnell would all profit financially from Margaret’s demise. Has a relentless killer tracked and sabotaged the Burnells, or did Arthur simply abandon his wife for his share of the money, leaving her to die an icy death?

AN ICY DEATH is the fifth book in the Jeff McQuede High Country Mystery Series. Each book in the series contains a complete story and can be read as a stand-alone.