Chris, in a nutshell, tell us the juicy stuff about yourself and your journey through life.

Well, I originate from Sheffield, England, left school at 16, clueless, as all 16 year olds should – it’s so young – where I worked my way up to… NOTHING.

Not until my late 20s did I decide to do something about it.

I developed an avid interest in languages, eventually managed to read for an BA Hons in French and Spanish, moved down south, taught English for a couple of years, in sunny Hastings (good ol’ 1066 country), and then moved onto France for a number of years, teaching English phonetics in Marseille university.

I then moved north, to Lille, where I decided to put pen to paper – I’d had the idea of my debut novel swimming around my mind for years.

I wrote it over 3 years, with lots of long breaks in between. And in 2005 I came back to this country with it but kind of put it under the bed – there was too much going on in my life to devote time to trying to get it published. I came back to it in about 2011 – long break.

I also came back to England in 2005, where I’ve lived in London and Norwich.

I’ve since got myself a Masters in Literary Translation, and work as a translator. I write my own books when I get a moment, and when I’m not trying to plug them – you know how it is!

What triggered your pen to paper?

I’ve recently talked about this in another interview, and said that I recall so much of years gone by, details, crazy details, of what people may have said in certain situations, for example, and it’s as if my mind was recording it all for later years, like I was destined to write at some point – I think I’ve been subconsciously composing books for years.

A student at university once told me I should write a book. That was about 20 minutes into chatting at the bar. Little does he realize what he did. I blame him…

You already have three books out there.  What are you working on at the moment?

I’m working on my forth book – 3rd novel – in ‘The Rowlings Years’ series, the series which is set in different periods of the 20th century, eventually moving into the 21st. Not telling you the title yet. I’m also working on a series of short stories – flash fiction – based around my latest novel in the series, Nancy Boy: for one year only…, as well as a series of children’s stories, which my daughter is illustrating for me. I’m a busy beaver.

What draws you to a book?

Two things. Sometimes the author. I, like any reader, have favourite authors. But mainly, I go for subject matter. I’m very particular about what I read. I don’t go for reviews either, never have. Nor the cover, for that matter. Crazy, when such things are so important to us as authors…

If you had to mentor a new author and steer him or her in a successful writing career what advice would you give?

Be yourself. Write for yourself first of all. Don’t let anyone tell you it’s good or bad. Just write. Keep at it. And read lots – we learn so much from reading, we become stale otherwise…

If we had to teleport ourselves into your office, would we find organized chaos or everything in its place?

Well, my study is New York Taxi yellow, with the walls a whole collage of pics, which go to define me as a person, all bright and vivacious – smiles he – so no matter what kind of mess it ever gets into it always looks great. I think if you could transport yourself into my study you’d never want to leave…

Chris, thank you for the chat!  We won’t tell anyone about the secrets we uncovered today.  Honest!  I’d like you to suggest an author you would like to read about in an interview.  Would you like to suggest someone?

I’d like to suggest Suzy Henderson. She’s an author I haven’t known long. But I love the fact that she’s into all things 1940s, particularly aviation. I think it’s a good time to chose her because she has a new book on order on Amazon as I type, Called The Beauty Shop

Chris has agreed to a giveaway.  I have one of each of his books available through Amazon.com   Please leave a comment and a like on this post.  The winners will be chosen within the week. 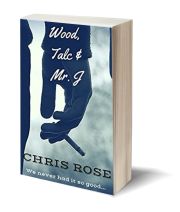